I got an interesting email from the RCN today. Can you guess what it’s about? 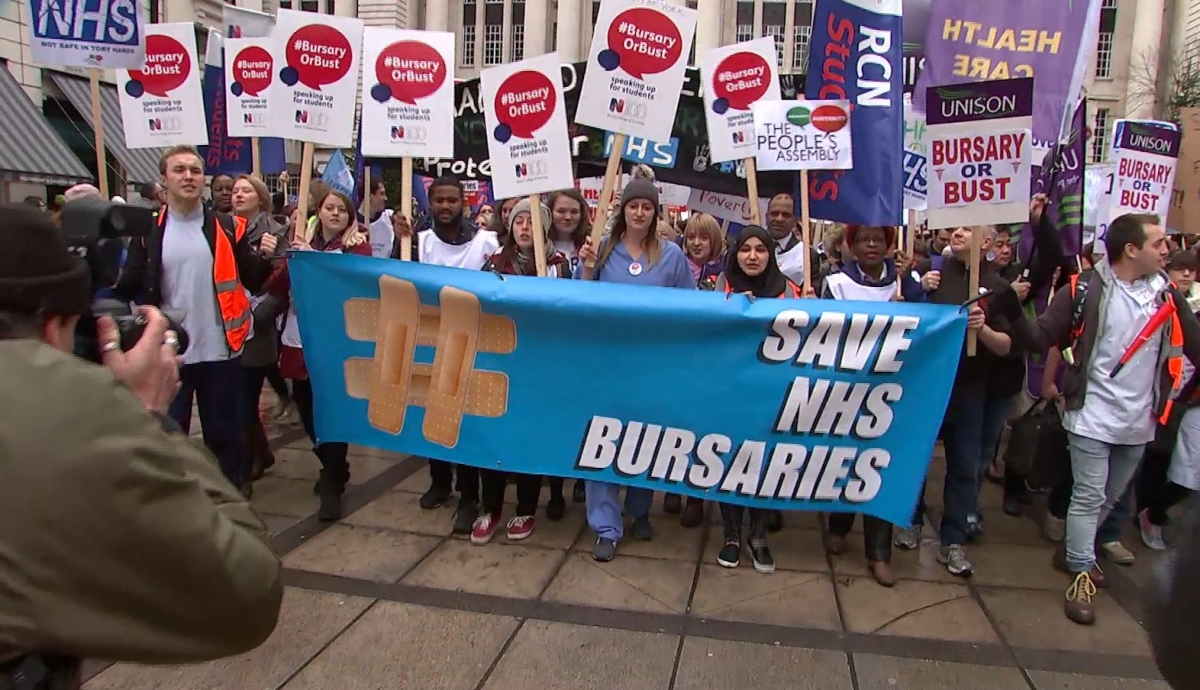 In case you’ve not kept up with current events (and if you’re a student nurse, then who can blame you? You’ve got essays and placements, often at the same time), our government wishes to scrap bursaries for student nurses and replace it with the student loan system. On January 9th, student nurses marched and protested and rabble roused against this decision. It is now May and I have received an email saying that I should email my MP (or MPs because of my term-time and home-time addresses differing). If you’d like to do so, here’s the link.

I find myself thinking about this in comparison to the junior doctors, who have had their… what? Fourth, fifth strike? Against our government’s decision to change their hours. In many medical staff members’ views, the decision to change these hours will make hospitals unsafe as a whole as staffing numbers will be stretched thin. (“7 day NHS” I remember scoffing as I was commuting to a hospital shift at 0645am on a Saturday). And don’t get me wrong, I agree with them. Not only are the arguments supporting the change unsubstantiated (“SEVEN DAY NHS” I hiss angrily at 2am on a Sunday during a night shift), anecdotal evidence from everyone I know including myself knows that it’s just not true. And so it can be said that I support the junior doctors.

But I also agree with the student nurses. As a student nurse, I know that I would not be a student nurse if the bursary system was not in effect. It’s not a lot of money (it just about covers rent), but I would not have been able to take out a £9000+ a year loan – nor would I have wanted to. I’m not old by any means but I’m at an age where I don’t want to incur any more payments. I want to start saving for a house/car/cat, and having a chunk of my (very poor starting) wages taken out by Student Finance would be… painful. And seeing as the average age of nursing students is 29, I can’t be the only one that feels this way. That’s a whole decade off the average age of university starters! A decade behind in payment! So… why aren’t we on our 5th strike?

I’m not saying that strike action is the best way to handle things – if I’m honest, I’m pretty neutral about it (probably because it’s too cold outside for me to want to march down the street). I’m just intrigued as to what the main differences are between nurses and doctors that leads to one group striking and the other group…well… not. So I looked it up .

The RCN has never ever gone on strike before, was the first thing I found out which is surprising because the RCN is 100 years old, and I’m sure there must have been something worth striking for in the past century. That isn’t to say that nurses and midwives haven’t gone on strike though, with the most recent one being in 2014 over a 1% pay rise. So this means that nurses are allowed to strike. There is nothing in the law that says that we can’t. But should we?

I… don’t really know the answer to that.

I don’t think that strike action will endanger patients, or at least not to the scale that people claim that it will. Skeleton staff, and keeping staff in high dependency units and on ICU would mean that the sickest of people will have care, and there’s always agency staff (y’know, if they’re not on strike too). Tuesdays and Sundays are two of the safest days of the week, statistically speaking, so striking on those days would be ideal. Also, as a union, as a group of public health sector workers, we have a right to voice our opinions. We’re human and we have thoughts and maybe they should lead to action.

But not many people agree with that. Public opinion very much seems to fall on the side of the “endangering people” argument, and what’s the point of a strike if the public isn’t on our side? How much staff would be needed in order for there to be a “skeleton staff”? What if accidents happen, how many people need to be in A&E? What if women go into labour, how many midwives need to be in? What about elderly care or rehabilitation, where some patients need 4-6 people to roll over every 2 hours? Perhaps this is why the RCN is a little more hesitant to support strike action than the BMA. While the junior doctors strike, there’s some staff to fill in the gaps. Who fills in the gaps with nurses?

Anyway, this isn’t a call to arms, at least where striking is concerned. Get involved in the conversation, whether you agree with the bursary cuts or not. I’ll certainly be here to listen and debate, and maybe we can come up with ideas for our future.

One thought on “Night Nurse: Get Busy Living or Get Busy Striking”