As I lie here in a pool of blood, a tangled mess of hormones and cramps, I wonder vaguely how my ex is doing.

I saw him in public the other day and this was actually my reaction. But that’s another story for another day.

Not that my ex and I are in any way close. If I could go back in time, I’d have stopped our meeting (going back any further would just increase the chances of me, A Black Person, getting murdered anyway), and I only want to see him in the future when I am rich and successful so that I can be petty in an Aston Martin. But the reason why I think of him in these monthly trying times is because he once asked me if there was any way I could “push it out”.

“Yeah, y’know…. your *stage whisper* period. Can you push it out, like a baby? Or like pooping?”

It has been 4 years since that fool asked me that and I still chuckle heartily at the thought. Sir, you have a sister and a mother. I was your 4th girlfriend. You have access to the internet. Are you seriously asking me this question??????

Dated him for his looks (and because he liked anime)

I’ve seen Twitter conversations and Reddit threads on this very same topic. It seems like there is a significant portion of the population who does not know what 50% of the population get up to monthly. How is this a thing? Who do I have to complain to so that this is fixed? Do non-menstruating folk have a manager I can speak to?

To be fair, this is but a small part of how sucky people are at having The Talk with kids. It amazes me that people can remain woefully ignorant of a whole system of organs in another person just because they don’t have a set themselves. And before you ask, yes, I do know the bits and bobs of men’s bits and bobs. I am a licensed healthcare professional. Also, I have access to Google.

I think that this kind of learning should start early. Kids get curious about the body at a fairly early age (the first time I saw a penis I was about 6, we had come back from the beach and my cousin stripped naked and went to wash himself under the pipe outside. I think there’s a picture of the two of us, we’re at the age where nudity is cute and not a felony). I remember asking what it was and my mother (Number One Stunna OG) told me (cuz the streets ain’t got nothing on Mama D). She never left me hanging on those questions, perhaps because she was a nurse herself, or perhaps because she is a #Gangsta4Lyf. It’s not a hard question to answer. Boys have penises and girls have vaginas (heteronormative I know, but it was the 90s). Some people stand to pee, others do not. Why? That’s how we were made. Cool ok, can I have a snack? Ok sure. 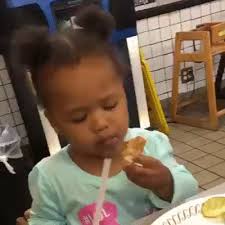 I was a simple kid

OG Don Momma never stopped having the talk with me. As I got older, my mother changed the conversation from the basics of consent (“if someone touches you and you don’t like it, kick them and aim low”) to where babies come from (“when you’re old enough, a man puts his penis in your vagina. But only when you’re older, and you’re ready, and you can pay to take care of a child because my diaper-changing days are over”). When I got my period, my mother pulled up some online encyclopedia and, a little misty-eyed, explained to me that this would be a monthly occurrence so carry lots of pads. When I grew boobs, my mother informed me not to let people touch them without my permission. I overheard the word lesbian and was told it’s when a girl likes a girl romantically. The last time I had the updated version of the talk (V2.5.2) was about 3 weeks ago when I was informed to double up on contraception as I have just started work and I don’t need no babies right now. Lifelong Learning, y’all.

I’m aware that I am lucky. Many people I know are still waiting for their parents to give them the birds and the bees talk, and hey that’s OK! But that is no excuse for ignorance. Non-menstruating people of the world, learn what a uterus is and why we complain about cramps. Understand why I have suddenly become grumpy and spotty, and why it lasts 3-7 days, and why I may start unconsciously rub my chest in public. Wikipedia uses a lot of big, confusing words so if that’s way too much to deal with, ask your local woman. They’re not hard to find, there’s 3.5billion of them in the world. I’m sure one of them will be willing to divulge the secrets of the womb. Just don’t ask her if she’s on her period for whatever reason. She will murder you and you will get no sympathy from me.